This website is dedicated to Dr. Himadri Kumar Sarkar, father of the present author, and one of the pioneers of urological surgery in this country. His contribution to Indian urology has been recognised by the Urological Association of India by the Himadri Sarkar Memorial Oration delivered annually as the inaugural event of the annual meeting of the association. The author was inspired into an urological career by the memory of his father who died in his childhood.

The life and times of Dr. Himadri Sarkar
Dr. Himadri Kumar Sarkar was born in 1920 at Kurseong, a small hill town near Darjeeling in West Bengal. After a brilliant high school and intermediate career he joined Medical College, Calcutta in 1938. Here he excelled, with an enviable scholastic record, and passed the MB examinations in 1944. After a brief stint as an Anatomy demonstrator he left for England in 1948, where, within a year he passed the Fellowship examinations of the Royal Colleges of England and Edinburgh. 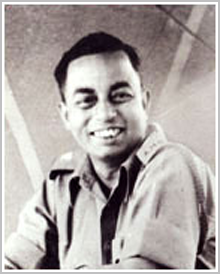 In England he trained under the redoubtable Harry Hamilton Stewart at the Bradford Royal Infirmary; it was here that he developed a love for the specialty of Urology. Back in India he worked as surgeon to the Calcutta Port Commissioners between 1949 and 1956. Here he developed a reputation as a fearless surgeon. He published several acclaimed research papers on partial gastrectomy and post-traumatic injuries of the cervical spine in these years. In 1956 he joined SSKM hospital (now IPGMER), initially as a general surgeon, though over the years his career interest was gradually shifting into urology .Dr Sarkar was also a member of the territorial army attaining the rank of Major. In 1962 he was called to action in the NEFA during the Sino-Indian conflict and there was thus an interruption of his career at the SSKM Hospital. After the war he was placed in Military Hospitals in Jabbalpur and Calcutta. In 1964 he returned to his appointment at the SSKM hospital and eventually realized his dream of creating an independent urology unit in 1964. This was to become a centre of excellence with wide ranging facilities for research and training. A wide range of urological surgery was performed in this unit. His main urological research interests were in bladder neck obstruction, vesico-ureteral reflux, renal function studies, urinary tuberculosis, outcome of prostatectomy, renal angiography, renal hypertension,and neuropathic bladdder. He had 32 publications in various journals, and read 15 papers to learned societies. He guided 11 MS students in thesis projects. He was examiner in Surgery to the University of Calcutta, and an examiner for MCH Urology to the University of Madras. He attained the rank of Associate Professor of Surgery, Calcutta University. He was one of the founder members of the urology section of the ASI, and the Urology Association, Calcutta. He died in the year 1970 at the age of 49.